Achieving gender equality has never been higher on the political agenda. The focus in international fora is often on achieving equal pay, equal access to opportunities in the labour market, or equal representation in parliaments, on boards and in government. Much of this vital work implies a focus on women in urban contexts. But often too little attention is paid to women in rural communities who still remain one of the most marginalised groups in society.

Rural women face many constraints that limit their social and economic opportunities: lack of land rights, infrastructure and basic services, restricted access to decent work and social protection as well as exclusion from decision-making processes and leadership positions.

Indeed, people’s access to food relies largely on the dual work of rural women as producers and caregivers.

And yet empowering these women is critical for rural development, sustainable agriculture, food security and improved nutrition. Indeed, people’s access to food relies largely on the dual work of rural women as producers and caregivers. Women represent on average 43% of the agricultural labour force – for example, growing crops, livestock and fish farming – and 65% of the unpaid family workers in developing countries1.

In 2018, the United Nations Commission on the Status of Women recognized the importance of securing women’s land rights, guaranteeing equal economic opportunities and empowering rural women to achieve the 2030 Agenda.2 Providing women with equal access to productive resources could increase the production on female farms by 20% to 30% in developing countries. But in order to ensure rural women are not overlooked or left behind, it is imperative to understand the various facets of the problem.

The problem
Rural women continue to bear the brunt of poor access to childcare services, training, transportation, medical and cultural services, and face a severe lack of job opportunities. Distance from healthcare facilities, services and information as well as from qualified health professionals represents a major obstacle for rural women and girls. In the least developed countries, a rural woman is 38% less likely than an urban woman to give birth with the assistance of a skilled health professional.3

Rural women also tend to have lower access to means of production (including land, water, seeds), agricultural inputs, as well as having poor access to social protections systems. Women are also less likely to own land: cultural and legal barriers mean that only 20% of landowners are women. In Latin America and the Caribbean, for example, women account for less than a third of agricultural holders, ranging from 8% in Guatemala and Belize to 30% in Jamaica and 31% in Peru4

Girls in rural areas are twice as likely as urban girls to be out of school.

Education is another factor, and while significant progress has been made, girls in rural areas are twice as likely as urban girls to be out of school, and only 39% of rural girls attend secondary school, compared to 45% of rural boys and 59% of girls living in urban areas.5 Rural girls also lag behind rural boys in levels of educational attainment.

Rural women have less autonomy, voice, agency and decision-making power in households, and are less likely than men to be elected as representatives in most rural councils.6 In Nicaragua for example, there are few occurrences of women as wihta or síndico – the key positions holding power over communal land.7

The social, cultural and legal barriers
The OECD’s Social Institutions and Gender Index (SIGI)8 shows that the formal and informal laws, social norms and practices that restrict women and girls’ access to empowerment opportunities and resources – defined as discriminatory social institutions9– exacerbate gender disparities in the agricultural sector.10

Rural women are particularly vulnerable to gender-based discrimination in social norms, both in OECD and non-OECD countries. Indeed, rural populations are less likely than their urban counterparts to be aware of women’s rights and entitlements.11 Research has found that in rural settings, men and women are more likely to follow customary laws and practices, which are often more discriminatory than statutory legal frameworks. Disappointingly, the laws or customary practices of 102 countries – over half the countries in the world – still deny women the same rights to access land as men.12 Furthermore, anti-discriminatory legal frameworks have proven insufficient to fully protect women’s rights to resources and assets due to discriminatory opinions and practices.

Discriminatory social norms dictated at the household level designate women as primary carers, leaving them with an unequal division of labour and a greater share of unpaid care work. This forces women to juggle their household responsibilities with work in the field, often to the detriment of their productivity.13 Rural women therefore tend to spend more time in reproductive and household chores than urban women; including time spent fetching water and fuel – due to a lack of basic infrastructure and public services.

On account of gendered social norms that view unpaid care work as a female prerogative, women across different regions, socio-economic classes and cultures spend on average between three and six hours on unpaid care activities, while men spend between half an hour and two 14 Latin American and Caribbean rural women dedicate an additional ten hours in care work and household responsibilities compared to urban women, and three times more than rural men. This also makes women less mobile, and more reliant on their immediate surroundings, which can make them particularly vulnerable to the effects of climate change on agriculture, and similarly, rural women are often the first to “absorb shocks” from food crises.

Making the invisible, visible: solutions
The OECD is working across multiple fronts to address these inequalities and empower rural woman. This effort is structured around four pillars.

First, undertaking legal reforms and gender-sensitive policies are necessary to protect rural women’s rights and promote gender equality, as called for by SDG Indicator 5.1.1.15 In particular, harmonising customary laws with national laws in line with international human rights commitments would significantly improve women’s land rights. Even where these land rights are legally guaranteed, discriminatory customs and practices restrict their ability to own, control, inherit, manage and make decisions over land. Legal reforms must be accompanied by long-term interventions such as awareness-raising campaigns and community dialogues to ensure full acceptance of harmonisation between customary law and statutory law. This should then be accompanied by legal literacy programmes to help women, families and communities understand their legal rights to property. Effective legal tools to protect women’s land rights include joint titling, providing equal inheritance rights, recognising female heads of household, and improving women’s ability to access technology and other agricultural inputs.

In terms of gender-sensitive policies, it is important to ensure that women can access basic services, particularly education and health services by improving provisions and providing better infrastructure and connectivity. Indeed, all policies should be viewed through a gender lens; the OECD advocates gender budgeting as an effective way for governments and local authorities to promote equality through the budget process. Planning budgets with women’s empowerment in mind can help policy-makers address a range of gender inequalities that have become embedded in public policies and the allocation of resources.

Second, it is essential to challenge discriminatory social norms and practices. On the one hand, this means ensuring the implementation of legal reforms that promote rural women’s rights and reduce ongoing discrimination. This involves developing and carrying out programmes to address women’s unpaid care work in line with SDG 5.4 through the provision of infrastructure, public services, social protection programmes and campaigns to support the equal redistribution of responsibilities within the household. On the other hand, it is important to dispel stereotypes and “traditional” views of women that prevent a more equal division of household tasks, or prevent women from entering the formal labour market, or girls from continuing education. Gendered stereotypes can be tackled through education, for example by reviewing textbooks to ensure they are gender neutral, or through the promotion of role models that rural girls can relate to. In Mexico, the OECD has worked with the Secretaría de Educación Pública to establish NiñaSTEM Pueden16, an initiative to encourage school girls to take STEM subjects, by introducing them to Mexican female role models that have been successful in STEM fields.

Third, the participation of rural women in the labour market must be improved. This is key for the sustainability of many rural communities across OECD countries. Around 6% of the OECD population live in remote rural regions, compared to 20% in rural areas close to cities. The demographic constraints in remote rural regions are significant, as areas are faced with the dual challenge of ageing and demographic decline. These population trends will not be reversed, unless women are better integrated into their labour markets, which could involve agricultural, but also non-agricultural sectors. Effective policies include targeted programmes for women entrepreneurship or the establishment of cooperatives, which tend to employ unemployed women. Having more family friendly policies, education and family planning is also crucial, as are investments in health services, infrastructure and secondary education.

Last but not least, greater investments are needed to bridge data gaps and to enable the monitoring of progress. There is a large data challenge when it comes to measuring social norms that are discriminatory to rural women, mostly because of a widely held perception that social norms are unquantifiable. However, the OECD SIGI has shown that social norms can be measured, and that tracking progress on efforts to tackle the drivers of inequality is feasible across all regions, irrespective of levels of development. The SIGI can help measure the underlying drivers of gender inequality, and SIGI country studies provide policymakers and development practitioners with key data on discriminatory social institutions across countries. Measuring discriminatory laws (formal and informal), attitudes, norms and practices across different regions of a given country highlights the effects of discrimination on gender inequalities, poverty and the marginalisation of women; it also shows how discrimination against women interacts with a variety of factors, such as rural/urban differences or education levels.

Countries should have gender-disaggregated statistics across all areas.

But there is also the more fundamental challenge that data collection across countries is too patchy to be meaningful for a global average. Most of the data provide national averages, which hide rural-urban disparities among women. Countries should have gender-disaggregated statistics across all areas. Incorporating gender dimensions into socio-economic surveys and carrying out better-dedicated surveys are fundamental to tracking change and designing appropriate policies for rural women, female farmers and producers.

Rural women are the powerhouses of rural communities; they keep households running while playing a pivotal role in the rural labour force. Yet, they have been invisible for too long, and their needs are often overlooked or ignored. We must design, develop and deliver the gender inclusive policies necessary to empower women with skills, quality jobs, childcare, good health and greater well-being. Further, as rural women are often at the bottom of the income distribution, supporting their advancement would also support the lives of families that have been left behind. In this way, it is women who will be the agents, not only of their own destinies, but of more inclusive, sustainable and dynamic rural societies. 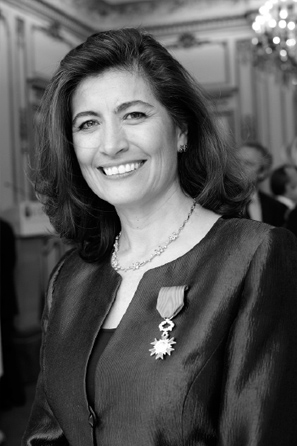 OECD Chief of Staff, Sherpa to the G7 and G20 and Special Counsellor to the Secretary-General Paris, France