Inequality Is Our Greatest Challenge

For 15 years, I worked for the United Nations Development Program (UNDP), where I was able to witness, first hand, the importance of different sectors in national development. This was further reaffirmed when I led the Council of the National Concertation for Development (CCND), as we worked to prepare an inclusive road map to guide the country’s long-term vision for development.

I welcome the opportunity to write about this topic, which ties together two objectives that have defined my professional career: achieving sustainable development as well as gender equity, in order to provide everyone with opportunities.

For me, gender equity is a priority at both a personal and professional level. Over and above justice, rights or social equilibrium, evidence shows that if the gender gap in the economy alone were to improve by 25%, the global Gross Domestic Product (GDP) could increase by 5.3 billion dollars by 2025, according to the World Economic Forum. Improvements in the economy, along with equal opportunities, would guarantee a better distribution of wealth, which would bring us closer to closing alarming gaps with respect to poverty.

The fact that women are not able to aspire to the same positions as men is an open secret. Historically, women have been relegated to second-class status in society. It was not until the last century that women gained the right to receive an education, vote, hold public office and take maternity leave.

A clear example that demonstrates this lack of equity is women’s implicit obligation to look after their homes and families, which means they have less time for professional development. The belief that this obligation should be imposed on a single gender continues to persist, despite the fact that sharing this obligation would benefit everyone.

I welcome the opportunity to write about this topic, which ties together two objectives that have defined my professional career: achieving sustainable development as well as gender equity.

For rural women, shared responsibility for household chores is a virtually inconceivable goal. Gender roles, imposed by their culture and society, are firmly implanted in this sector of the population; as a result, women are confined to the reproductive sphere and to the care of children and the elderly, duties for which they receive no remuneration.

Rural women face even more unfavorable situations than other women or those who work in rural areas.

Women head less than 25% of households, even though the number of rural households headed by women increased by 40%1 between 2002 and 2014. Furthermore, three-quarters of these households are classified as inactive or are involved in small-scale agriculture. All of this directly affects the economic situation of rural women, whose participation level is just 45%, compared to 81% in the case of rural men.

The agriculture sector in Panama represents a low percentage of the GDP; however, it is the sector that provides the greatest number of jobs. This demonstrates the sector’s importance, and underscores the need to support the sector in order to strengthen it. To this end, this administration has promoted the “Panama Exports” program, which seeks to foster the diversification of Panama’s agrifood exports and linkages between agricultural entrepreneurs and export markets through the provision of training opportunities, advisory services and technical assistance. The program’s brand promotes a high-quality export culture, aimed at positioning Panamanian products in the international market with a seal of excellence.

Most rural women who carry out professional duties are involved in the agriculture sector. It is worth mentioning that Panama has one of the highest percentages of women agricultural producers in Latin America.

However, over the past decade, Panama has witnessed a significant upsurge in the incorporation of rural women into the labor market. Additionally, the duties that rural women carry out have become increasingly diverse as women have moved beyond the agriculture sector to take on different roles in the manufacturing industry, social services, trade, teaching, health, housekeeping and tourism.

Governments must implement public policies that are geared toward narrowing gender gaps; they must also involve women in policymaking and facilitate their participation in political leadership.

Panamanian initiatives that benefit rural women
In light of the challenges that rural women still face when striving to achieve personal and professional growth, the Republic of Panama has implemented several initiatives through different government institutions.

With respect to the empowerment of rural women, the Rural Development Directorate of the Ministry of Agricultural Development (MIDA) held the Fifth Latin American and Caribbean Meeting of Rural Women (ENLAC) in 2017, which sought to drive discussions on the main problems that affect rural women in Latin American and Caribbean countries. Some of the issues discussed were the achievement of the 2030 Agenda, the effects of climate change, the protection of rural women’s human rights, and information and communication technologies (ICTs) as management and empowerment tools. MIDA, in turn, provides daily technical assistance to 200 organizations of rural women in Panama. The Project for the Transfer of Opportunities opens doors for rural women with limited resources in order to reduce poverty levels.

On the other hand, the Gender Office of the Ministry of Labor and Social Development (MITRADEL), together with the National Institute for Women (INAMU) and other institutions, have organized various training and awareness-raising workshops for women in rural communities and areas. The training sessions address a number of topics, including soft skills for artisans, the narrowing of gender gaps, self-esteem, empowerment, cost and investment, preparation of business plans, human talent development, sexual and reproductive health, healthy lifestyles, and primary healthcare. The objective of these workshops is to provide training to women micro-entrepreneurs in order to strengthen their economic autonomy, enabling them to exceed production for self-consumption and, instead, channel production toward markets.

INAMU and MITRADEL implemented the initiative entitled “Tú puedes mujer” (“Women: you can”), which trains women in vegetable farming, how to launch their own businesses, and how to process fish and shellfish. Together with the Micro, Small and Medium-Sized Enterprise Authority (AMPYME), INAMU is also implementing the “Creating opportunities for women” project, which seeks to train rural women in matters related to business plans. Upon completing the training program, women are able to apply for seed capital to launch their first businesses.

Governments must implement public policies that are geared toward narrowing gender gaps; they must also involve women in policymaking and facilitate their participation in political leadership. We must undertake efforts to ensure that women acquire more property rights and greater access to credit and funding opportunities; to increase women’s participation in production chains and the distribution of products; and to support the strengthening of rural women’s organizations, among other necessary actions. These public policies must also take into account the specific characteristics of rural and indigenous women, such as their language, education, culture, traditions and beliefs, without limiting their access to technologies and infrastructure, in order to guarantee greater productivity and quality.

The results of the Multidimensional Poverty Index (MPI) study carried out in Panama in 2017 revealed that 19% of the population lives in a state of poverty, which is particularly prevalent in rural and indigenous areas, where women are the most affected by traditions such as marriage, starting a family at a young age, ethnic discrimination and limited access to education, which result in greater poverty and marginalization. Although the MPI shows that the poverty rate has dropped by a few percentage points, we acknowledge the fact that we still have a long way to go, not only at the national level, but also at a regional level. Inequality is our greatest challenge, but we have the capacity to overcome it and we have already taken concrete steps in that direction.

Projects aimed at increasing access to quality education and healthcare services have been prioritized in rural areas, in addition to the development of infrastructure to facilitate market access for women’s products.

Interinstitutional programs promote the financial inclusion of women in the rural sector, providing them with the tools they need to carefully manage their resources. In this way, by the time they begin to generate income, they are able to save money and carry out financial planning while making their own decisions, leading to investments that strengthen their businesses and, in turn, guarantee their sustainability and provide access to a better quality of life.

I am a firm believer that any progress toward the fulfilment of Goal 5 (“achieve gender equality and empower all women and girls”) will bring us closer to achieving the other 16 goals.

Gender equity in the 2030 Agenda
The 17 goals and 169 targets of the 2030 Agenda for Sustainable Development express the interest in achieving gender equity, reducing poverty and providing better living conditions for everyone. I am a firm believer that any progress toward the fulfilment of Goal 5 (“achieve gender equality and empower all women and girls”) will bring us closer to achieving the other 16 goals. Women represent 50% of the population; it would be impossible to achieve the 2030 Agenda without the active participation of half of the population. It is critical for all stakeholders in society, including women, to participate in order to accelerate sustainable development.

The 2030 Agenda also seeks to eradicate the poverty, as established by Goal 1: “end poverty in all its forms everywhere.” Rural women in particular fall prey to poverty due to their vulnerability. The achievement of these objectives with special emphasis on these groups seeks to achieve equity in all areas, through access to resources and services. Rural women’s conditions of vulnerability have caused them to experience high levels of poverty. Women’s susceptibility to poverty is disproportionately high compared to men, which is further proof of the need to achieve gender equity.

The Sustainable Development Goals (SDGs) provide an ideal context in which to prioritize rural women, a group that has lagged behind throughout history. At present, we possess the tools necessary to provide them with the opportunities they require to grow both personally and professionally.

As we approach 2030, all governments, companies and citizens must ensure that their development is aligned with and prioritizes the 2030 Agenda, which incorporates rural women into all of its objectives, both directly and indirectly.

I dream of a world in which women have the same opportunities as men, in which they are not discriminated against for being women, and in which their future is not defined by their gender, but rather by their merits. I am certain that this dream can become a reality, as long as we all contribute to its achievement.

1 ECLAC, FAO, IICA. 2017. The Outlook for Agriculture and Rural Development in the Americas: A Perspective on Latin America and the Caribbean. 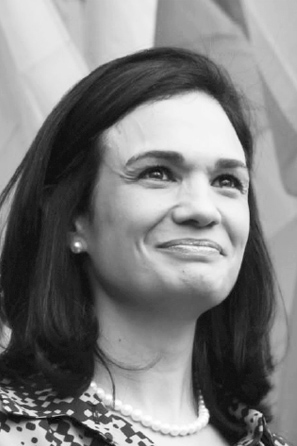