Empowering Women in Rural Areas:
Progress and Challenges in the Context of Agenda 2030

Now as never before, the world needs a powerful rural feminist movement

In October, the international community will commemorate three dates that are crucial for understanding the current and future importance of the new aspects of the Global Agenda for Sustainable Development. Between October 15 and 17, the United Nations will observe, as it has done since 2008, the International Day of Rural Women, World Food Day and, finally, the International Day for the Eradication of Poverty. These three events are closely linked, not only from a chronological point of view, but more fundamentally by a common thread that recognizes the importance of women’s work in the rural sphere and calls for the empowerment of rural women for food production, poverty eradication and efforts to combat inequality, in a particularly challenging environment, in order to attain the 17 major Sustainable Development Goals by the year 2030.

This new visibility of women’s role in rural spaces, which is also evident in literature, cinematography, the scenic arts and the development of new lines of research in the social sciences and the humanities, has to do with a growing appreciation of their potential as agents who trigger economic development and investment, social change, environmental protection and many other impacts that are positive for the wellbeing of non-urban societies. At the regional level, these were precisely the most important conclusions reached at the Conference on Rural Women in Latin America and the Caribbean (Brasilia, 2014) and at the Thirteenth Regional Conference on Women (Montevideo, 2016), which implemented the Rural Women Campaign, an effort based on the exchange and dissemination of experiences, best practices, policies, innovative mechanisms and actions specifically aimed at strengthening the role of rural women, defending their rights and promoting their participation in the sustainable development of their environment.

In general terms, women represent 40% of the planet’s productive force. Their involvement in the present and future economic activity of the world’s nations is considered essential, given that the sectors which are decisive for competitive growth in developing countries depend, in large measure, on women’s work. According to the World Bank, women own approximately 37% of all small and medium-sized businesses in the so-called emerging markets. This includes agribusiness enterprises, where many of the challenges faced by women in other economic activities are multiplied. At the same time, rural women account for up to two-thirds of the 800 million illiterate people on the planet.

As is well known, the agrifood sector is strategic for the future of the world’s population. By 2050, the global population will reach a staggering 9.6 billion people, which will imply a substantial increase in global demand for food. According to several estimates prepared by institutions such as the United Nations Food and Agriculture Organization (FAO), in order to satisfy that demand the world will need to increase its current food production by at least 70%. Therefore, it will be necessary not only to draw on the most important technological advances in recent decades but also to decisively adopt global public policies that promote women’s empowerment, training, legal equality and conditions that are substantially better than those prevailing today, in which discrimination against women remains pervasive.

Gender inequalities are especially entrenched and have deep historical and cultural roots in relation to issues such as land tenure - no more than 20% of the planet’s arable land is owned by women - access to production resources and access to financial services.

The levels of exclusion affecting women in rural settings tend to be considerably greater than those found in urban areas. Gender inequalities are especially entrenched and have deep historical and cultural roots in relation to issues such as land tenure - no more than 20% of the planet’s arable land is owned by women - access to production resources and access to financial services. According to Global Findex, a database containing data from 148 countries on savings and credit, the proportion of bank account holders is lower among women than among men. In developing countries, women’s access to credit is generally more restricted (at least 20% less access than men). Even if women are able to obtain a loan - which in several countries still requires them to have the authorization of a male family member – they have less access to other financial services such as savings, insurance and the digital means to administer their funds.

Furthermore, in rural areas there are cultural barriers that prevent women from owning cattle, making their own financial decisions or benefiting from government actions in the context of rural financing programs that appear to have been designed to meet the needs and requirements that are normally fulfilled by parents. According to FAO, reducing gender inequality in rural areas solely in relation to access to resources, services and employment, could boost agricultural production by more than 4%. This would help to reduce the number of people suffering from hunger by approximately 150 million. It is important to note that recent studies carried out in Latin America, Africa and South East Asia, show that women allocate a larger proportion of their incomes to the home and their families than men. This has major implications for rural areas where income disparities between genders, unemployment rates among women and the volume of unremunerated work they do reach even higher levels than in urban settings.

But empowering rural women also implies guaranteeing them full access to educational and training opportunities. The incorporation of rural women into formal education as well as their inclusion in technology workshops and cutting-edge agricultural training, has proven to be crucial in providing them with the skills and knowledge required to swell the ranks of a new generation of agricultural entrepreneurs, who are aware of the environment and the importance of renewable energies, determined to improve the quality of life of their communities and conscious of their role in guaranteeing food security. Fortunately, although there are still many formidable challenges to overcome in this regard, we are beginning to witness examples of success. In India, United Nations agencies facilitated training in solar technology for large groups of rural women so that they could apply this knowledge to light up their communities and use it in their crop fields. In Egypt, a new generation of microcredits for rural women who are heads of families is making an enormous impact, particularly since it is accompanied by training initiatives co-sponsored by the International Fund for Agricultural Development. And in Latin America, businesses operated by rural women have achieved increasingly important results in Costa Rica, Mexico, Brazil, Bolivia, Guatemala and Paraguay.

The linkage between rural women’s work and food security also offers fertile ground for action. In subsistence agriculture and family agriculture, women play an active role in the first stages of every production chain, from preparing the land and planting to collecting the harvest. However, they do so while suffering from a structurally disadvantageous position, since fewer than 40% of rural women over the age of 15 receive any income from this activity. According to a World Food Program (WFP) analysis, this situation is largely the result, on the one hand, of limited access to property and subsistence assets such as land and credit, as well as energy and water and, on the other hand, the fact that they are less involved in the marketing of agricultural products and associated processes such as transportation and distribution networks. Consequently, the FAO and other agencies have paid special attention to policies specifically aimed at closing these gaps. Even so, it is surprising that 43% of food production jobs in developing countries are occupied by women, which means that their work is instrumental for food security.

Since the publication of the United Nations Secretary General’s report entitled “The empowerment of rural women and their role in poverty and hunger eradication, development and current challenges”, in 2015, efforts in this regard have multiplied considerably. Recently, the Hunger Free Latin America and Caribbean Initiative, as part of a collaboration between the Community of Latin American and Caribbean States (CELAC) with authorities of the FAO and other regional agencies such as the Economic Commission for Latin America and the Caribbean (CEPAL), adopted the Plan for Food Security, Nutrition and Hunger Eradication 2025. This initiative has created a new awareness of these issues the region. For example, Guatemala has passed a new Family Agriculture Law that includes specific budgets to address gender inequalities. In Paraguay, the Public Policy Law for Rural Women adopts principles that ensure women’s access to credit, land, markets and fair trade. In Colombia the Ministry of Agriculture has opened a new Office for Rural Women, while in Costa Rica the Gender Equality Plan contemplates mechanisms to give visibility and articulate demands and opportunities for the development of microenterprises for rural women.

Indeed, the Second Goal of the 2030 Agenda for Sustainable Development is to end hunger, achieve food security and improved nutrition and promote sustainable agriculture. The empowerment of women contributes directly to the fulfillment of this goal, as well as to the fulfillment of the Fifth Goal – to achieve gender quality. But it also contributes to another really fundamental objective, one that does not necessarily receive sufficient attention. I refer to the Third Goal of the Agenda, which is to ensure healthy lives and promote wellbeing for all at all ages. Specifically, it involves efforts to reduce maternal and child mortality. The vulnerability of rural women, in terms of their access to adequate medical services, is a fundamental barrier to the full exercise of their rights and is often an insurmountable obstacle to developing their full potential. Therefore, providing them with sufficient and specialized medical services must be a priority in every system that seeks to empower rural women.

But in the context of linking our efforts with the Global Development Agenda, it is clear that we need to propose many initiatives. First of all, it is essential to promote the organization of rural women in cooperatives or associations to guarantee their equitable participation in decision making. Empowerment also means ensuring a growing participation and leadership of rural women in public decision making bodies at all levels. To achieve this objective, better indicators must be developed to measure the performance of public policies that focus on this issue, addressing the different forms of political and patrimonial violence against women and supporting their participation in the processes of marketing and distribution of agricultural products. It is worth emphasizing that rural women are not merely women farmers. Beyond agricultural activities, women are also a central and vital part of food production value chains and they establish and operate micro-enterprises.

No less important, however, is the task of ensuring their full participation in discussions to improve their situation undertaken by the international community, especially within the international organizations. Now, more than ever before, the world needs a powerful rural feminist movement. Let us contribute to this objective and to ensuring that the relationship between women and the land becomes the central pillar of this century’s public policies. 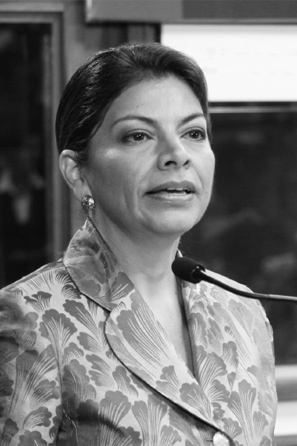 Former President of the Republic of Costa Rica