Created in 1928, the Inter-American Commission of Women (CIM) was the first inter-governmental agency established to ensure recognition of women’s human rights. Since its establishment, the CIM has become the principal forum for debating and formulating policy on women’s rights and gender equality in the Americas.

Gaps persist between the normative and legal framework and practice in the actual implementation of women’s human rights and equality.

More recently, with the approval of the 2030 Agenda for Sustainable Development and its sustainable development goals, countries committed to achieving gender equality and empower all women and girls (Sustainable Development Goal #5). This commitment includes several targets that are important to highlight in the current context: to undertake reforms to give women equal rights to economic resources, as well as access to ownership and control over land and other forms of property, financial services, inheritance and natural resources; to recognize and value unpaid care and domestic work through the provision of public services, infrastructure and social protection policies and the promotion of shared responsibility within the household and the family; to ensure women’s full and effective participation and equal opportunities for leadership at all levels of decision-making in political, economic and public life; and to eliminate all forms of violence against all women and girls in the public and private spheres, including trafficking and sexual and other types of exploitation in rural areas.

Women need to have equal rights as men, which means equality in inheritance rights, the possibility of ownership of land, cattle and other economic resources, equal access to training both in agricultural and other areas useful in their environment, and they need to be knowledgeable in the managing of natural resources, especially water, and in ways and means to prevent or at least diminish the impact of the consequences of climate change. Women also need to have the right to receive education and access to new technologies and to learn about their rights and how to defend them. Women also need to have the right to live free of violence and fear and to contribute to the well-being of their families and of their communities.

In analyzing the situation of women’s human rights and gender equality, it is imperative to take into account intersectionality of other dimensions of discrimination, such as age, race, disabilities, migrants or displaced women, and rural women, among others. Discrimination and lack of access to rights is aggravated by these special situations of vulnerabilities, which perpetuates their lack of access to rights and equal treatment, and ultimately perpetuates their situation of poverty. In order to achieve gender equality, intersectionality needs to be taken into account.

Specifically for rural women, and according to statistics from the Food and Agriculture Organization of the United Nations (Regional Office for Latin America and the Caribbean), in Latin America, 40% of rural women over the age of 15 do not have their own income, although they work on a daily basis without pay. Their contribution to the care economy has been fundamental to the daily subsistence and productivity of rural households, without the economic retribution. The FAO also indicates that in addition, rural women in the region only have a fraction of the land, credit, productive inputs and education that men do.

At the current rate of progress, the overall global gender gap can be closed in 79 years in Latin America and the Caribbean.

The World’s Economic Forum’s Global Gender Gap Report for 20171 recognizes that the gaps between women and men on economic participation and political empowerment remain wide, with only 58% of the economic participation gap being closed, and estimates that at the current rate of progress, the overall global gender gap can be closed in 79 years in Latin America and the Caribbean.

Addressing these persistent gender gaps becomes imperative not only to be able to guarantee the full protection of women’s human rights, but also to the economic and social development of our region. The Global Gender Gap Report for 2017 also underscores that a variety of models and empirical studies have suggested that improving gender parity may result in significant economic gains, and that fair returns to skills and the availability of deeper talent pools are disrupted by existing gender biases, with the greater losses on the benefits of diversity seen in the fields of care economy and the emerging technology sector.

Rural women’s contributions to economic, environmental and social gains for sustainable development are of great importance for their societies and communities. However, they face enormous challenges in access to basic services, such as healthcare, education, credit, and other opportunities for personal and economic growth. In this regard, women’s empowerment becomes crucial to their well-being and that of their communities, but also to the economic growth and productivity of their respective countries.

This underscores the importance to empower rural women and girls. Public policies and programs aimed at providing rural women and girls with access to education and specialized training need to be a priority for our region. In addition, public policies and programs also need to foster co-responsibility between women, men, the State and the private sector for social reproduction, including care. It is not enough to provide rural women and girls access to education and specialized training so they can be empowered and become part of the formal economy, with all its benefits, if the redistribution of traditional roles and responsibilities at home is not also addressed. As men become more involved in the care of the household and dependents, women have greater opportunities to increase their participation in the productive economy, increase their earnings and provide greater contributions to the household and the overall economy.

In addition to providing opportunities for rural women to participate in the formal economy, public policies also need to be implemented in the region to provide comprehensive support and social protection from a gender and rights perspective to women engaged in economic activities in the informal sector or for unpaid work at home or in their respective communities. The Americas still faces the challenge to incorporate a rights-based approach and economic, social and cultural rights, which are established in the region’s legal framework, into its social protection systems through sound and committed public policy to facilitate the implementation of the existing legal framework.

In terms of women’s political empowerment and leadership, women in the Americas face great obstacles to be able to exercise their leadership and political rights. This is exacerbated at the local level and in rural areas, where women’s participation in politics is even more limited than at the national level. There also persist patriarchal cultural patterns that perpetuate discrimination and inequalities for women, especially rural, indigenous and afro-descendent women. Ultimately, women’s political participation is imperative in order to be able to have inclusive democracies, with the capacity to represent a plurality of interests and demands. Overcoming the exclusion of women from political life and in particular positions of leadership, representation and policy-making is one of the crucial challenges facing both women’s empowerment, and democratic systems in the Americas.

The importance of empowering women in the political sphere has been recognized by the region. The CIM is currently actively working in supporting the full exercise of women’s political citizenship and parity in political representation as essential conditions for governance and a citizens’ democracy in the countries of the Americas. In order to address this objective, the CIM is working on raising awareness of political leaders on the impacts of gender inequalities in the political sphere, women’s political rights and gender parity, as well as increasing institutional capacity of political and electoral authorities in the region to mitigate political violence and harassment against women. As mentioned before, intersectionality needs to be taken into account as we advance the work towards women’s full political participation. Working with rural, indigenous and afro-descendent women continues to be a priority of the CIM in its engagement to strengthen their political participation, leadership and empowerment.

In addition, one of the pillars of the Economic Commission on Latin America and the Caribbean’s (ECLAC) Montevideo Strategy for Implementation of the Regional Agenda within the Sustainable Development Framework by 20302 is “Popular and citizen participation: democratization of policy and society”. This pillar refers to the contribution of women, in all their diversity, to the design, application and follow-up of policies at the national and international levels.

Referring to the International Day of Rural Women, one needs to recognize the important gaps that persist between women in rural and urban areas and to take all the necessary measures to eliminate them in the shortest time possible.

The recently approved Third Hemispheric Report on the Implementation of the Belem do Para Convention3 has included specific recommendations to the effect of taking into account the intersectionality of the different dimensions of discrimination, including rural women. Some of these recommendations (1) urge States to approve legislation and design and implement public policies aimed at preventing and eradicating conduct, cultural or discriminatory practices based on the subordination or inferiority of women and girls; (2) adapt state apparatus for more effective access to justice, so that the special needs and obstacles faced by groups of women and girls with greater vulnerability to violence are taken into account (including those women in rural zones, in situations of poverty and exclusion, language barriers, etc.); (3) and allocate significant budgets in order to carry out mass campaigns, actions and national programs for the prevention of violence against women, in accordance with full compliance of the obligation of due diligence to guarantee life free of violence. The MESECVI recognizes the importance of investing in the prevention of violence against women not only to ensure the exercise of their rights, but also to contribute to reducing the costs involved in the care and sanction of this type of violence (health, specialized services, courts, reparation of rights).

Referring to the International Day of Rural Women, one needs to recognize the important gaps that persist between women in rural and urban areas and to take all the necessary measures to eliminate them in the shortest time possible. This will be the only way to fully honor our commitment to equal rights and gender equality.

Through the Inter-American Democratic Charter, OAS Member States recognized that “democracy and social and economic development are interdependent and are mutually reinforcing.” They have also recognized that the elimination of all forms of discrimination and respect for diversity in the Americas contribute to strengthening democracy. The strength of our democratic institutions depends on the inclusion, diversity and plurality of the participation of its citizens. The value of the role rural women play in our societies, their contribution to the economy, their empowerment and leadership, the respect for their human rights, and their equal access to opportunities and services will only greater contribute to the consolidation of our democracies and democratic practices. Public policies enacted by the countries in the Americas need to address the persistent gaps, and provide the opportunities, services and access that rural women need to develop their full potential and to provide even greater contributions to our communities and societies in general. 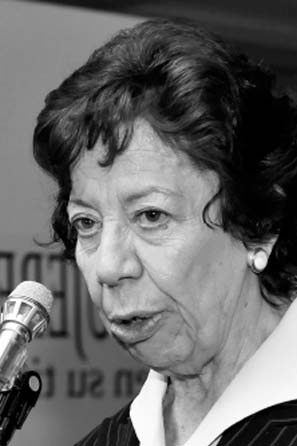