The future of agriculture is female
There’s one thing I should make quite clear to readers from the outset: I personally have been very privileged. I grew up in a country and at a time in which women’s rights were no longer a subject of negotiation. Nevertheless, it was and still is a time in which there is much to be done to ensure that women can contribute to the same degree as men in all areas of public life and hold executive positions. To ensure that it is not them by default who must give up their career or assume an extreme double burden as soon as they start a family. Yet this is also a time in which the position of women in our society can be regarded as highly exemplary - we have had a woman at the head of our government for many years: Dr. Angela Merkel.

Agriculture has many facets: In many countries it can symbolise strenuous manual labour, whilst in others it is a high-tech and digitalized part of the economy. Whilst in some barren and dry regions of the world, agriculture struggles to produce anything from nature’s scarce resources, in other regions of the earth harvests seem to crop up as if by themselves.

Yet despite the fundamental differences in their requirements - such as climatic conditions, types of cultivation and the degree of technology in use - in many ways, agriculture is similar all over the world: Agriculture provides us all with the basis for the food we eat and as such is a conditio sine qua non for our existence. Agriculture is thus not just any sector; it is a sector devoted to life and its essentials.

But who we mean when we speak of “agriculture”? Who are the people behind this term? In many regions of the world the majority of these people are female! It is predominantly women who are feeding the world!

Unfortunately, the contribution they make is not always appreciated to the same extent. Quite on the contrary: In my opinion, we must make efforts to counteract this lack of awareness and appreciation.

Rural women around the world
The 2030 Agenda adopted by the United Nations therefore quite rightly underlines the significance of gender equality. This is not just a goal in itself but also an overarching guiding principle which is laid down in 11 of the 17 SDGs. No country can expect to develop successfully if it does not include the capabilities, knowledge and creativity of half of its society. In economic terms, this is an intolerable waste of resources.

And in terms of how we view and treat each other, discriminating against women in society is the sign of an outdated societal structure that urgently needs renewal. It is the responsibility of all people to ensure these changes take shape in our own societies. This is also why my ministry is working to support women in rural areas and women working in agriculture.

The facts speak for themselves:

The role played by women in agriculture and rural areas is of global importance: Women form the backbone of our rural areas.

According to the World Farmers’ Organization, 43% of people working in agriculture worldwide are women, in some countries up to 70% of the agricultural workforce are women. Women are responsible for 60-80% of global food production.

In many countries, whether industrialised or developing, rural women are also affected by poverty, poor education opportunities and inequality. Women often face meagre prospects of living and thriving in these areas. 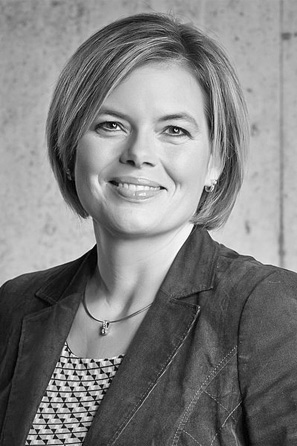 Federal Minister of Food and Agriculture