A successful farmer requires a lot of things — including good land, good seeds and animals, helping hands, tools, time and know-how — and most women farmers don't have equal access to any of them.

When our foundation was only a few years old, the former head of the World Food Programme told a colleague of mine, "If the foundation doesn't pay attention to the gender differences in agriculture, you will do what many others have done in the past, which is waste your money. The only difference will be you'll waste a lot more."

Bill and I started our foundation to fight poverty and disease around the world. We invest in agriculture because roughly 75% of the world's poorest people live in rural areas, and the majority of them rely on agriculture or farming for their livelihoods. Making their farms more productive can help them eat more, earn more and live better lives.

I'm embarrassed to say it now, but at the time, I wasn't thinking much about gender inequalities in connection to our anti-poverty work. I definitely wasn't thinking about them in relation to agriculture. I bet if you'd asked me to close my eyes and picture one of the farmers we were trying to reach, I would've pictured a man.

As it turns out, statistically speaking, at least half the time, I should've been picturing a woman — and often, a mother. It also turns out that, while making a living from a small family farm plot is hard for anyone, the data tells us that it's especially hard for women. A landmark 2011 study from the UN's Food and Agriculture Organization showed that women farmers in developing countries achieve 20% to 30% lower yields than men.

Why does this gender gap exist? It's not that men are inherently better farmers. It's that a successful farmer requires a lot of things — including good land, good seeds and animals, helping hands, tools, time and know-how — and most women farmers don't have equal access to any of them.

The barriers holding back women farmers take many forms. Some countries still have laws and customs that bar women from inheriting land. Cultural norms mean that women and men tend to grow different crops and raise different types of animals — and because agricultural research tends to focus on the high-margin crops that men grow, there's been less innovation in the lower-margin crops that women farm.

The list goes on. Women often have less decision-making power at home, including over the family budget, which makes it more difficult for them to invest in the supplies they need. Cultural norms also mean that women are never just farmers: They're expected to spend hours each day gathering water and wood, cooking and caretaking, which leaves them less time to do other things, including farm.

All of these learnings were a revelation for Bill and me. We'd started out thinking that better technology was the best way to help farmers increase their yields. But the potential for a farming revolution wasn't just in improving inputs like seeds; it was in the power of the women who plant them. Therefore, our efforts would need to put them at the center.

Since then, we've made a number of grants that are specifically designed to reflect the realities of women farmers' lives. For example, we helped one of our partners, Farm Radio International, create a radio program that taught women best practices for growing tomatoes. When creating the show, they also made sure to research what time women tended to listen to the radio, recognizing that if they put the program on while men were home and controlling the dial, women weren't going to get the information they needed.

Another program we supported, Pathways, operated by our partner CARE, went a step further. It not only taught women how to be better farmers — it also taught their husbands to see their wives as equal partners. I travelled to Malawi to see this program in action and spent time with a farmer named Patricia. Patricia told me that the program had helped her gain access to new skills and seeds. She also told me about the impact it had on her marriage.

After participating in a few gender equality exercises, Patricia's husband realized that by refusing to invest in her farm plot and loading her down with other household tasks, he'd been hurting her farm's potential and keeping her from earning more income. He vowed to change.

By the time I visited her village, Patricia had quadrupled her harvest and had plans to expand her farm even more. And while the new skills and seeds had certainly played a major role, so, too, she told me, did the fact she now had "a supportive husband."

Today when I close my eyes and picture a farmer, I picture Patricia — and I try to make sure that my colleagues do, too. Because once you have a better understanding of who's doing the farming, it's much easier to design solutions to help them succeed.

My new book, "The Moment of Lift," makes a case for prioritizing gender equality around the world. I believe that when we lift up women, we lift up humanity. And as Patricia's story demonstrates so powerfully, sometimes, all that's needed to lift women up is to stop pulling them down. 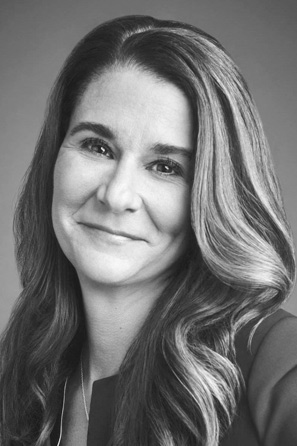